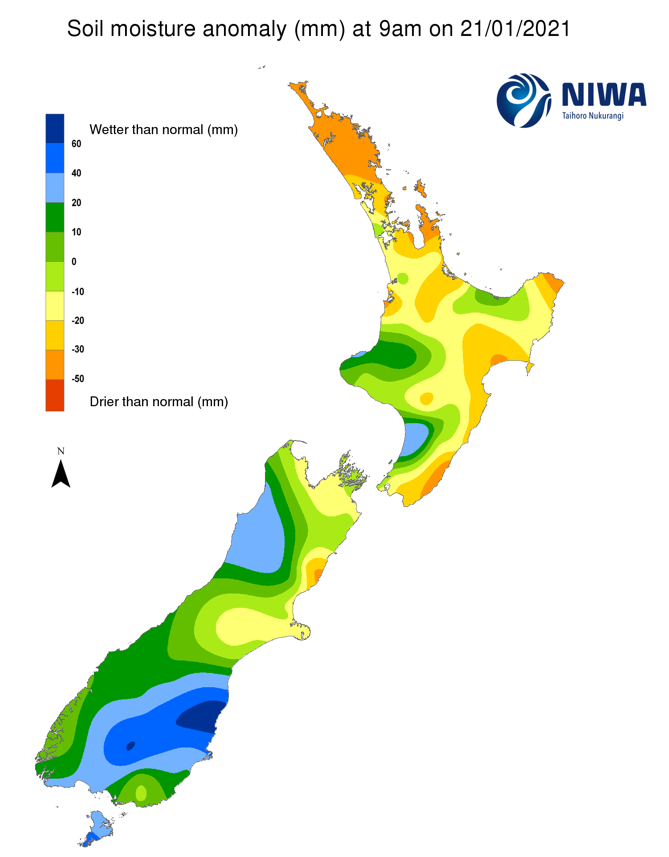 A weekly update describing soil moisture patterns across the country to show where dry to extremely dry conditions are occurring or imminent. Regions experiencing significant soil moisture deficits are deemed “hotspots”. Persistent hotspot regions have the potential to develop into drought.

Hotspots are currently in place in much of Northland, parts of Auckland, northern Waikato and a small portion of East Cape, while hotspots have strengthened in eastern Wairarapa and expanded to include the eastern Tararua District and coastal Hawke’s Bay. The New Zealand Drought Index (NZDI) map below shows that meteorological drought and severe meteorological drought are in place in the northern half of the Far North District. Widespread dry-to-extremely dry soils are in place in the remainder of Northland, Auckland and northern Waikato.

Widespread heavy rain fell across the west and south of the South Island during the past week, with parts of the West Coast and western Southland receiving over 150mm, and parts of Otago and eastern Southland receiving over 50mm. However, rainfall was generally below 20mm across the Canterbury and Marlborough regions. This resulted in large soil moisture increases in the west and south of the South Island, with small soil moisture increases in parts of the Canterbury and Marlborough regions. The driest soils in the South Island compared to normal for this time of year are located in coastal Hurunui District, while the wettest soils for this time of the year for the South Island are found in southern Canterbury and interior Otago.

A small hotspot remains in place in coastal Hurunui District.

Saturday will be a mostly dry day across the North Island before a band of showers brings 5mm or less to western areas on Sunday. Dry weather is expected nearly everywhere from Monday to Wednesday (25-27 January), while hot temperatures will contribute to increased evapotranspiration. Rain and showers then look to arrive on Thursday as a front moves across the North Island. Weekly rainfall totals look to generally below 20mm for most of the North Island, with some areas of the north and east receiving 10mm or less.

Due to the light rain in the next week and the hot temperatures expected on Tuesday and Wednesday, most of the North Island will see small-to-moderate soil moisture decreases. However, moderate-to-large soil moisture decreases will be possible along the east coast. This will likely result in all current North Island hotspots strengthening, particularly those in the east.

Due to the expected rainfall in the next week, small-to-moderate soil moisture increases are likely in the west and south of the South Island. However, additional soil moisture decreases are likely in Canterbury and Marlborough. This will at least slightly strengthen the current hotspot in the Hurunui District, while new hotspots may emerge in Marlborough and central Canterbury.

Hotspot Watch: a weekly advisory service for New Zealand media. It provides soil moisture and precipitation measurements around the country to help assess whether extremely dry conditions are imminent.

Pictured above: Soil Moisture Anomaly Maps, relative to this time of year. The maps show soil moisture anomaly for the past two weeks.

As of 19 January, the New Zealand Drought Index (NZDI) map below shows that meteorological drought and severe meteorological drought are in place in the northern half of the Far North District. Widespread dry-to-extremely dry soils are in place in the remainder of Northland, Auckland and northern Waikato. Please note: some hotspots in the text above may not correspond with the NZDI map. This difference exists because the NZDI uses additional dryness indices, including one which integrates the rainfall deficit over the past 60 days. Changes are therefore slower to appear in the NZDI compared to soil moisture anomaly maps that are instantaneously updated.